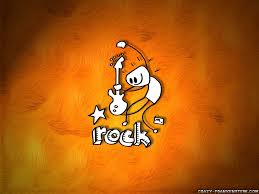 Now I’m not talking about us old grungies who got into rock music when it was hip and cool and everyone had long hair. I’m talking about the young rock fan of 2014.

It is every teenagers duty to become enamoured with music their parents hate. It’s all part of the natural rebellion and carving of youths independence. In my day this was painfully easy. Even the rather inoffensive sounds of the Beatles would engender the desired pained expression and I had a seemingly endless collection of genres which would cause similar distress. Perhaps this is why I have such varied tastes today.

Not so with today’s teenagers. What do you do when your parents listen to pop and rock music already? We have Gansta Rap of course and Death Metal which even hardened rock loving parents would cringe at, and in the last decade the endless ‘thump thump’ music whose bass will penetrate the thickest of walls and double-glazing. Each era has it’s ‘commercial norm’ and the overproduced ‘thump thump’ variety rules the roost currently. There are of course always a small selection of teenagers who don’t rebel as thoroughly as others and pick the singer-songwriter genre, perhaps with a bit of swearing thrown in to raise the odd eyebrow.

Well the following observation is as unscientific as it gets, and based on a couple of neighbours/friends with 2 teenage sons (now about 18-20 respectively). In each case the older brother is the more studious, the more sensible, the more pleasant and currently more productive. The younger brothers are jack-the-lads, drive like lunatics, make a lot of noise and seemingly do as little as possible. Now this is where it gets interesting! Both older brothers picked rock music as their genre of choice, admittedly of the very heavy variety (but they’ll mellow as they get older), and the younger brothers play their thumping rap and club music at ear-shattering volumes wherever they go. An interesting parallel with possibly no significance whatsoever.

I think it unlikely that the music itself affects character, certainly not judging by some of the rock fans from my youth. But then rock is no longer du jour. So perhaps rock is picked by the more introspective youth, whereas the mainstream will be more appealing to the kind of social animal who wants to party and to fit in with the norm. Rock certainly isn’t dead as some proclaim – not if there is a place for it within young personalities. I’m hoping that if enough parents in our future generation will listen to mainstream dance music, their children will revert to something more musical. Or perhaps this is already happening…

Would love to know if anyone else can back up my analogy… or more probably blow it out of the water..