A little bit of Cockernee goes a long way, innit. 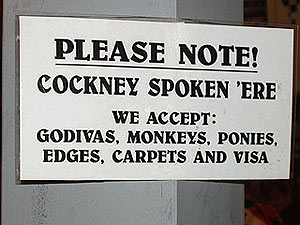 Those of you who have heard me interviewed will know that I sound a little… well… posh. It’s partly my erudite upbringing (and that I use words like erudite) and partly the fact that English is actually my 3rd language and thus I do not have any regional roots where accent is concerned.

I initially learnt more English from the annual summer trips to the US accompanying my father on tour when I was a child, and I had a decidedly anglo-american twang before I moved to the UK. That soon disappeared once I attended school here.

Due to those lack of roots, I’ve always been a bit of a linguistic chameleon, adapting my accent to those around me. Now don’t get me wrong – though I have a great ability with International accents, my regional ones are pretty appalling! Attempts at a Welsh accent quickly descend into me ordering an Indian buffet.

No – it does take some time with me. For example, when I lived in Leeds, where I attended Uni & then met the Violet hour boys, it took a few years for me to attain a weird Yorkshire hybrid whereby all in Leeds thought I was a ‘Southern puff’ and the Southerners thought I was a ‘Northern git’. Definitely a no win situation. I envy drummer Steve who can accurately mimic all accents and voices to a spooky level and regularly has us in stitches with his impersonations. The fact he’s not a famous comedian is down to nerves rather than talent. But I digress…

I confess to having a soft spot for Cockney. That cheeky chappy accent. I can successfully go a little apples & pears when the mood takes me. It’s incredibly useful when haggling for cheaper goods or building work! If you sound like a posh git they’ll take you for every penny they can get.

I also love doing interviews with Lee Dunham, as he has a proper Norf London accent, and adds a bit of credibility and cool to the muesli eating, taramasalata dipping, middle class image that my accent construes. Not very rock n roll, is it.

One of my early boyfriends was a proper East End Cockney, and I remember giggling uncontrollably the first time I heard him call a cabbie ‘Guv’. And swearing takes on a whole new dimension as well (the Scots do it pretty well too). It has rubbed off on me just a little.

I’ll just finish by saying: ‘Would you Adam & Eve it! Me Artful Dodger ‘as hung his Alan Whickers on my Apples & Pairs whilst I was tinkling Aunt Joanna…Cor Blimey.’