Big Confusion at the Dogs Home… 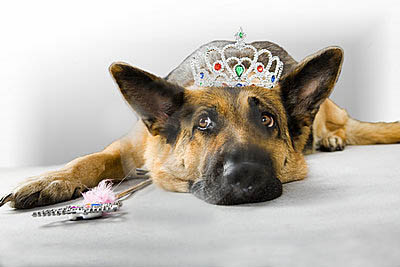 Little Englanders are well known to be big animal lovers, and like so many of you I give to an Animal charity – currently the Dog’s Trust in my case, though they’re all equally worthy.

I give one of those small, yet regular amounts, that one must assume add up to a fair pile of dog chow or perhaps a set of shots over time. And presumably there are a fair few of us doing the same and between us, we manage to keep things ticking over.

What does frustrate me though, is that I get regular ‘Dog’ magazines, stickers and badges, which don’t interest me in the slightest and must surely dilute the good my small donation is doing. I really don’t need a Christmas Card from the dog I’m sponsoring.

In fact the whole principle of ‘sponsoring a particular dog’ is in itself rather ridiculous. I remember the initial form where I was prompted to pick one of 6 dogs featured. I ticked one at random – I can’t remember the name of the dog, but let’s call him Barnie for the sake of the exercise – and sent off the paperwork. Now presumably thousands of other people all received the same invitation, and therefore thousands of people are sponsoring the same 6 dogs.

Now I’m not naïve enough to think that donations aren’t shared out equally, but this pretence has been going on for years! I’ve had several doggy Birthday wishes from Barnie, and even letters from Barnie (that’s one intelligent dog – no wonder he has so many sponsors).

According to this scenario there should be 6 extremely fat and pampered dogs in the home surrounded by a horde of skinny and extremely resentful mutts, all wearing gang headbands, and counting the minutes to recreation time so that they can exact some vengeance.

And imagine if several families of sponsors all decide to visit their star dog at the same time. There’s Barnie being pampered by 20 people with all the other dogs barking out ‘Oi! What about me?!!!’.

And I reckon this must have happened at some point, because the sponsorship blurb clearly states that Barnie is not good at socialising due to past trauma and therefore cannot be visited (very clever). Luckily he can still write letters, so that’s ok.

So much is this pretence supported that I received a letter a couple of years ago to say that ‘Barnie’ had died of old age (no tissue included in the package on this sad occasion – very remiss) – no doubt because various people had already sponsored him for 20 years and were growing suspicious. But – hurrah! – I was assigned a new dog to sponsor (let’s go for ‘Oliver’) who will no doubt be sending me letters from now on.

Perhaps the questionnaire should include: ‘Is a child involved in this sponsorship?’ and if the answer is ‘no’, dispense with all this idiocy and save some much needed money to spend on vets and collars.

Would love to hear about some equally daft marketing ploys to keep you donating to your charity!