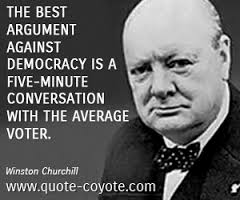 In honour of Winston Churchill’s death anniversary, I thought I would do away with the usual heart-felt eulogy. It’s debatable whether he would have made a great peace-time leader, but I for one, with my part-Jewish history, am extremely grateful for his standing up to the Nazis. Enough said.

Here is but a sample of his amazing and often hilarious quotes. He certainly would have made a great comedian!

“A lady came up to me one day and said ‘Sir! You are drunk’, to which I replied ‘I am drunk today madam, and tomorrow I shall be sober but you will still be ugly.”

“Lady Nancy Astor: Winston, if you were my husband, I’d poison your tea.
Churchill: Nancy, if I were your husband, I’d drink it.”

“My wife and I tried to breakfast together, but we had to stop or our marriage would have been wrecked.”

‘’ My most brilliant achievement was my ability to be able to persuade my wife to marry me.’’

“Life is fraught with opportunities to keep your mouth shut.”

‘’ You have enemies? Good. That means you’ve stood up for something, sometime in your life.’’

‘’ Success consists of going from failure to failure without loss of enthusiasm.’’

‘’ Socialism is a philosophy of failure, the creed of ignorance, and the gospel of envy, its inherent virtue is the equal sharing of misery.’’

“Men occasionally stumble over the truth, but most of them pick themselves up and hurry off as if nothing ever happened.”

“My tastes are simple: I am easily satisfied with the best.”

“Tact is the ability to tell someone to go to hell in such a way that they look forward to the trip.”

“The best argument against democracy is a five-minute conversation with the average voter.”

“A fanatic is one who can’t change his mind and won’t change the subject.”

“The greatest lesson in life is to know that even fools are right sometimes.”

“Everyone is in favor of free speech. Hardly a day passes without its being extolled, but some people’s idea of it is that they are free to say what they like, but if anyone else says anything back, that is an outrage.”

“In the course of my life, I have often had to eat my words, and I must confess that I have always found it a wholesome diet.”

“A good speech should be like a woman’s skirt; long enough to cover the subject and short enough to create interest.”

“When I am abroad, I always make it a rule never to criticize or attack the government of my own country. I make up for lost time when I come home.”

“Sometimes doing your best is not good enough. Sometimes you must do what is required.”

“We contend that for a nation to try to tax itself into prosperity is like a man standing in a bucket and trying to lift himself up by the handle.”

“Democracy is the worst form of government, except for all the others.”

“When you have to kill a man it costs nothing to be polite. ”

“The United States invariably does the right thing, after having exhausted every other alternative.”

“Where does the family start? It starts with a young man falling in love with a girl – no superior alternative has yet been found.”

“This paper, by its very length, defends itself from ever being read.”