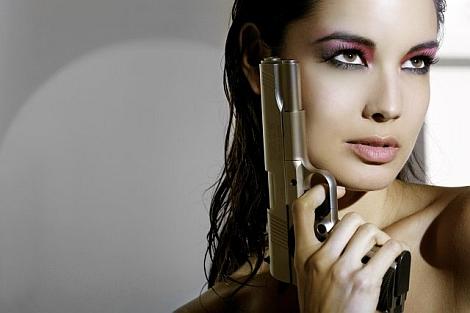 For a woman who is desperately independent and believes in equality, I am utterly crap when it comes to ‘manly’ things like DIY and fixing cars. Frankly, I don’t even try anymore. I just call a bloke and get him to sort it out. After all, why spend a great deal of time doing something badly, when someone else can do it far better in a fraction of the time. Hmm. Not much of a feminist really.

If I were Jane Bond on the other hand (I can’t be a James – that would be weird), I’d be an honorary member of the A-team, knee deep in tool collections and able to build a helicopter out of toilet rolls.

A typical example of my ineptitude was on Wednesday night on the way to a gig and the van got a flat tire. Lee leapt into action and managed to change it in record time without unloading the van and with rather flimsy tools. And we still got to the gig in time. The other two boys dutifully helped in macho ways leaving me as the nurse to the doctor, handing Lee the odd bolt. If that had happened to me I would have stood by the side of the road looking as helpless as possible, hoping a man would come to my rescue. It’s generally worked in the past. That or the AA.

Having arrived at the gig, we of course need to carry all of the instruments, PA speakers etc into the venue. I say ‘we’ loosely. The boys do 99% of it whilst I pathetically carry a few stands and play ‘guardian of the van’. Now if I were Jane Bond, I would have charmed all of the male patrons to carry the gear in for us! Damn. Where did I go wrong.

Where I’d really like to be Jane Bond is with noisy neighbours. Coming back after the gig last night at about 1.30am, I was greeted with the sounds of some kind of rave going on at the bottom of the hill. The last thing you want after a noisy gig. The bass was permeating my walls in nauseating waves for some time before one of the immediate neighbours evidently complained and things quietened down.

Now what I really wanted to do: roll up on a Harley (looking vaguely tomb raiderish), sache through the door, shoot the stereo with a sleek gun, effortlessly wrestle and incapacitate my outraged (and no doubt drunk) attackers, and leave to the thunderous applause and gratitude of all of the surrounding neighbours.

Alas – I will have to stick with music.
Doris Bond 000 signing out.