Is your head full of Numbers? 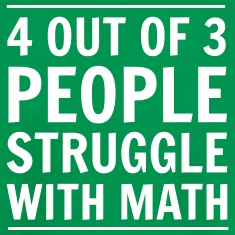 I have a confession to make. I’m good with numbers.

The fact that this is deemed ‘uncool’ these days speaks volumes. After all it’s only logic. And the problem with being a logical person is that it becomes incomprehensible when other don’t share it.

I remember the torture of my mother drumming the times table into me as a child. I threw several tantrums about that! At that point maths was still something amorphous and academic that related to my life not at all. At my French Lycee it was but another incomprehensible subject amongst many, which the rather scary exasperated teachers attempted to relay. The fact that all lessons were purely in French didn’t help matters.

It was at age 11 that I changed schools to an Austrian school which specialised in Maths. Exactly what the young and largely unmemorable teacher did I cannot say, but in that year Maths suddenly made sense. I got it.

When a year later I changed again to an English school I found myself in the top class. Similarly, at University, I was drawn towards the Logic section of my Philosophy subsidiary course, which concerns itself with mathematical formulations to logical statements. Easy peasy. I watched in amazement as my fellow students struggled with the concepts.

Has this been of any use in my life? Damn right it has! I’m a whizz at accounts. Once again this is seen as something utterly boring and uncool, but I’m pathologically organised when it comes to my finances and wouldn’t have it any other way. I still watch in wonderment how most people I know flounder with the concept. They’re constantly overdrawn, constantly paying silly charges. Not a clue.

I can only equate this with the reaction I have when someone starts talking to me about electronics or car engines: my brain immediately goes into test card mode and filters out every word. So I kind of get it. The downside for me is that I end up doing everyone else’s accounts for them. And someone else fixes my car.

One thing I love about basic maths and accounting is that it deals in certainties in an uncertain world. Music and performance are subjective, filled with variables, opinions, tastes. Doing accounts is wonderfully self-contained. Everything is rounded up or down to 2 decimals, and once everything adds up, you can draw a nice line under it and mark it down as a job completed. Most things in life just aren’t like that.

Interestingly some recent research published in PLoS One found that anticipation of doing math can actually affect the same regions of the brain that pain does. Essentially, math is painful. Other studies have shown that though a higher IQ and natural ability is an advantage in understanding Maths, it is just as important to be instilled with the necessary motivation and self-belief that one can improve, in order to do well. Does that mean a large proportion of the population just resign themselves to being ‘no good at it’ and giving up?

I appreciate this is a very unsexy subject! But I would still love to hear your thoughts on the matter.

My music is a lot sexier…..