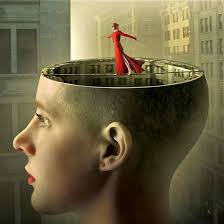 It occurred to me the other day that people rarely talk about their fantasies. In fact I’ve heard some people insist that they don’t have any. I find this almost impossible to believe. Now, I’m NOT talking about sexual fantasies here, which I’m more than happy to leave locked in peoples’ minds. Some things should be kept private as far as I’m concerned.

No – I’m talking about day dreams; flights of fancy; wishful thinking; comforting stories. The use of the imagination as personal therapy of some kind. People seem incredibly uncomfortable admitting to these, and I can’t quite figure out why. After all I find it inconceivable to believe that my imagination is that much greater than everyone else’s, and that I’m not in good company here. Authors and writers, especially those of fiction, must have particularly good ‘day dreaming’ skills in order to come up with their stories.

To further define the word, I’m talking about a ‘Fantasy’ which is completely separate from reality. So this doesn’t include thinking about different eventualities for a forthcoming meeting for example. The Fantasy I’m talking about should be totally fantastical – a scenario which would be impossible in reality or so unlikely that it would never realistically happen.

Some of these fantasies are fairly predictable – dreams of success. In my case, being a big star! (It’ll never happen.) That wishful thinking when we see a sports icon doing incredible things, and imagining it to be us. Guys – how many of you have imagined being a big football star? Dreams of being at the top of your field (whatever that may be) in an unrealistically grandiose way.

Then there are the ‘wishful thinking’ physical fantasies of being better looking, younger, taller, fitter, sportier, more confident etc. If given a choice of avatars would anyone apart from models choose themselves?

Vengeance features heavily in fantasies too. Imagining all manner of ways of putting those people in their place – the boss you don’t like, the annoying neighbour, the bloke who cut you up earlier today, that arrogant idiot you can’t stand. I find these extremely cathartic! Great way to release some frustration without actually taking it out on anyone.

And then there are the ‘perfect partner’ fantasies which are unrealistic to the extreme. One just has to look at the high sales of romantic novels to see the truth of this phenomenon.

One fantasy which links all of these apart from the last, is the fantasy of omnipotence & omniscience. I find this one particularly fascinating. On the surface it’s extremely gratifying. If you could do and control everything, there are literally unlimited ways in which to be vengeful, successful and beautiful. Knock yourself out with scenarios! But if you think about this a little longer it throws up enormous dilemmas.

At this stage I’d like to stress that I do not have a god complex, nor do I believe in a ‘god’, as in a superior being who controls and judges us all. So my ‘omniscient’ being would have to be based on a vastly superior intelligence, with consequently vastly advanced science and technology. In this scenario I have built my corporation with imagined futuristic capabilities, intelligent computers, nanobots, frictionless travel, ‘intelligent’ metals and materials, teleportation. I will have found the secret to perpetual youth.

This technology of course cannot be shared with others as humanity is not responsible enough not to abuse it. And here the real questions start: what kind of a superior being do you want to be? A vengeful selfish one? An uncaring one? Guardian of the Earth or humanity? Personally my morals dictate the latter.

Tricky stuff. The more you think about it, the more you realise that any interference, without having that superior intelligence and those advanced probability and outcome studies, are likely to do more harm than good. And if you believe in the premise that every action has an equal and opposite reaction, such a being becomes rather toothless without creating havoc. Create a cure for ageing and we overpopulate the planet within a couple of generations. So then you’d have to decrease fertility etc etc. You wouldn’t be able to have a proper relationship with anyone as no-one would live up to expectations and you would have too many necessary secrets.

So thinking about this too much, it becomes a lonely prospect. For those who believe in a God this would make a great explanation as to why he/she has washed their hands of humanity and have just left us to our own devices.

So – as an ultimate fantasy it’s great. But in reality I’m happy to be where I am. As ever I would love your input and hear about your fantasies (Come on! You can talk about this! Or tell me I’m crazy…).

By the way, my song ‘Latest Fantasy’ is not about this latter scenario (in case you’re wondering). If you haven’t heard it you can get a free download of it (top of page).