New Years Resolutions? Not for me! 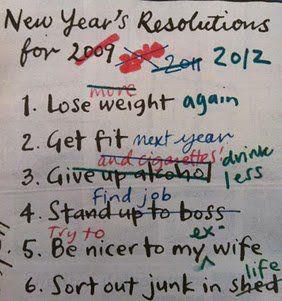 I cannot remember ever having had a New Year’s resolution. Which is just as well seeing as most resolutions apparently fail within the first week.

But I do feel like I’m missing out here. For me smoking would be the obvious one. Yes – I’m hopelessly addicted to tobacco and have been for more years than I care to remember. But without any obvious health effects smoking is enjoyable, and addictions… well they’re addictions! We can think of a whole lot of reasons not to give up. The latest announcement that 65% of cancers are caused by sheer bad luck is music to our ears, even though logically the remaining 35% could well be caused by smoking and obesity. But logic doesn’t come into it.

The point is, if I decide to give up smoking, it won’t be because of a date in the calendar. It would probably be due to the doctor telling me I have to stop or I’m going to die! Nothing works like a good shock.

As for other common resolutions I rather lack the vices. If I were overweight it would definitely be on the list. But luckily I’m not. I also hardly ever drink, so a dry January is a default month at any rate. I’m self employed so I do not have to stand up to a boss or vie for a raise.

So – my resolution is to find a vice of some sort which I can resolve to give up next year! That’s 2 years worth of resolutions sorted out in one fell swoop. Obviously I don’t want it to be something that will harm me or be too difficult to give up. So if you’re about to suggest Heroin, you need to go back to the drawing board. It also cannot be anything too disgusting. For example not cleaning the toilet for a year so that I can resolve to clean it more next year. Urgh.

The one thing I will definitely be doing in 2015 is finishing the new album. But that’s hardly a resolution. In fact it’s nearly done.

Perhaps you have some novel ideas for me. What are your resolutions? Perhaps I can draw inspiration from those….