You Know You’re Getting Old When…. 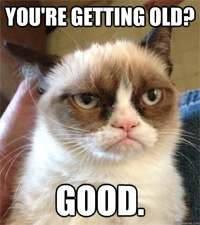 Last night I was woken up by loud female screaching and giggling at 3am. I’d only just dropped off being a night owl and don’t sleep well at the best of times, so this was exceedingly annoying.

How people survive with noisy neighbours I will never know, and I have a HUGE amount of sympathy for them.

Truth is, I live in a sleepy backwater, which is blissfully quiet, and young people generally can’t afford the area – hence no students and general peace. Unfortunately young people can no longer afford to buy their own flats or even the rent required, and so are continuing to live with their parents. And these particular parents are evidently away allowing their 2 sons to run riot and invite their giggling girlfriends for sleepovers, no doubt plying themselves with booze first and deciding that screaming in the garden at 3am is somehow a good idea. Result, a week of partying and waking up half the street. I know they woke up my lodger who has to get up at 7am to go work. Grr.

Now when exactly did I turn into this grumpy old bird? After all I’m no stranger to noise and lack of sleep – everytime we do some touring I have to share accommodation with the band and invariably people roll in drunk at all hours and someone always snores and as a light sleeper I don’t get much rest. But it’s always temporary. It’s work. It’s with the knowledge that I can catch up when I get back to my peaceful lair. Which is currently far from peaceful.

In fact it’s now hard to imagine that I behaved like that as a teenager, but of course I did. And generally mixed with alcohol which I think is at the root of most antisocial behaviour. Yes you’ve guessed it – I don’t drink much anymore and haven’t for a long time. Makes me feel ill and brings out the worst in me, so no point in doing something I no longer enjoy. Unfortunately most people I know (of all ages) still do and still demonstrate some of these antisocial traits we’re all familiar with. But not to the extent of teenagers.

I now have a serious disconnect to my teenage years. I know I was a complete nightmare. And I mean COMPLETE. But it’s like looking at a past life, or a parallel existence, with little empathy for my behaviour and an overwhelming gratitude that I came out of it in one piece. No wonder then that I generally find teeagers extremely irritating, from the inane conversations (‘ooh, I think he fancies me..) to the inexperience of knowing their limits and the extraordinary inconsideration towards others which I’m told is hormonal. That doesn’t make it any more palatable.

Yup – I’ve become the grumpy git next door! Perhaps I’ll eventually morph into the old lady who whacks people across the shins with my walking stick….